I have said it before and I will say it again I love a bargain.

Getting a three course meal for two people, for the low low price of $85 is fantastic. In fact I don’t know why all restaurants don’t jump on the band wagon- because I do not  know of one couple who would go out for a nice meal and not buy a drink or three or in this most recent case Mr Lid and I had 3 glasses of wine each and some sparkling water…. making what was meant to be a nice $85 evening a $185 evening, but not an eye lid was batted as it was still a great meal and well worth it.

Two fifteen on Dominion Road has been around for 5 or so years having recently-ish been taken over last May by a lovely couple who now work the floor, it has won some accolades in the past the most recent being Metro top 50 Restaurants in Auckland.

The food was simple, tasty, un complicated, generously portioned,yet under seasoned and  at times trying a bit too hard.

I would go again if just for the bread to start served warm, very chewy with a wonderful crust and the smokiest smoked butter I have ever tried- it was amazing and a lovely way to start the meal.

Mr Lid and I had a hard time choosing starters- we opted for the scallops minus the pork belly which came with a lovely pickled fennel and celeriac puree, and the air dried beef which while plentiful  was weird served with mash and a poached egg? Somewhat lacking in texture and well ummm finesse.

Mr Lid had the Beef main which was Huge, a real mans meal, again a large portion of mash and lacking texture it was gone in a flash and Mr Lid seemed rather happy with his choice, I had the snapper fillet with a herb and prawn risotto- the fish was moist and delicate (served with the skin on which I like but it was soggy not crisp which I find a waste of time) the risotto was a tad firmer than I like yet tasty and again a pinch of salt during the cooking would have made all the difference.

Dessert was decadent the chocolate dolice was rich dense and oh so moorish served with the classic vanilla ice cream and some dry pointless sponge and raspberry coulis, and Mr Lids Apple and Blackberry crumble was HUGE, nothing special although tasty in a nanna kind of way.

If only the chef had known the rule of the world’s most elegant woman, Coco Chanel, was said to have advised the following when dressing with accessories:

“Before you leave the house, look in the mirror and take one thing off.”

This rule can be applied to food… especially at Two Fifteen… 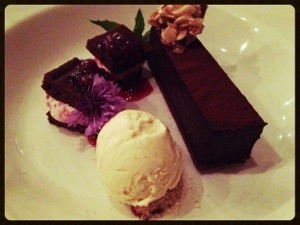